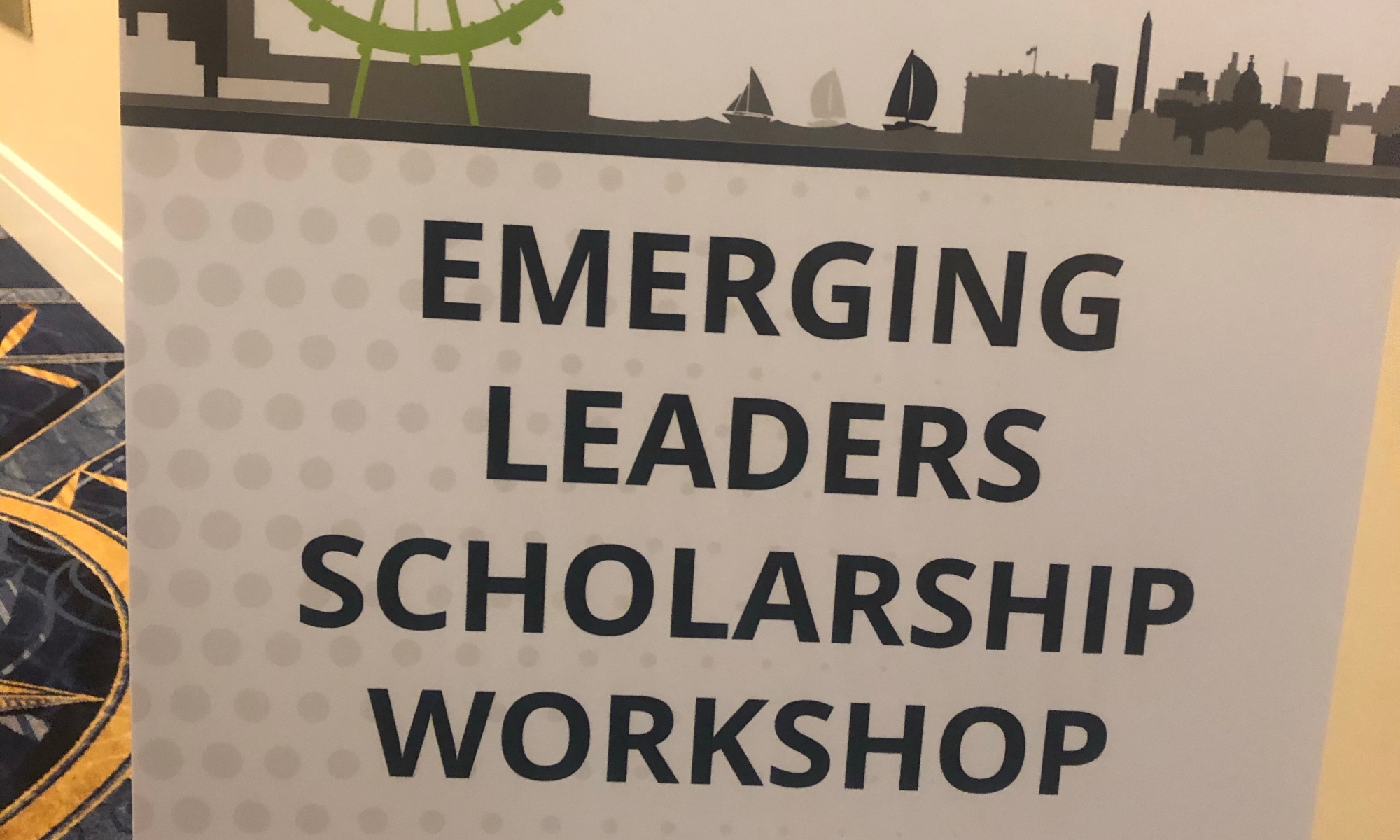 On 28th June I found out that I was a winner of ASBO International’s Emerging Leaders Scholarship. The only problem was that the conference wasn’t taking place until 24th October and so I had just under 4 months to distract my mind and stop myself bursting with excitement.

Luckily, two weeks prior to receiving this news, I had received a job offer so I had plenty to keep me busy while winding up at my current school. It was a manic mix of end of school year madness, organising summer works at the school and preparing handover notes for a successor.

All in all time moved at a rate of knots. The last day of term arrived and I did the “leavers run”. Picture 250 children congregated in a playground separated to leave a winding path running through the middle of them. A fog horn sounds and I set off running down the path and hi-fiving as many of the children as I can reach. I get half way through and the fog horn sounds again. Behind me another leaving teacher starts her “leavers run”. It’s a great tradition and I loved being able to say goodbye to all the children that way. A brilliant memory to take with me.

The next few weeks consisted of archiving, filing and shredding as well as ferrying my personal belongings home. Mid August arrived and I handed over my keys and said goodbye to my school of 2.5 years. I didn’t complete everything I wanted to but I had to draw a line under it and move on to the next thing. What next?

The following week saw me travelling 190 miles from London to Blackburn to take part in a photo and video shoot for an advertising campaign. I’d been invited along by GLS Education to take part and it was just what I needed to keep my mind busy. A more than welcome distraction.

Two weeks of the summer holidays left and I used some of the time to visit my new school and get to grips with my new role. A very worthwhile experience and again great for keeping my mind off my forthcoming adventure. My thoughts were completely consumed by the daunting task of having to address 250 people on my first day in my new job. Public speaking is not my forte so I worried and worried about it. However, knowing that I had no choice but to do it I made sure I was prepared as possible. I put some slides together and talked them through (to myself). 2nd September arrived and I did it! A small victory but I was proud of myself for tackling it.

As the conference date crept closer I discovered that there was a conference app I could download. I signed up to use it and felt like a child entering Willy Wonka’s factory. There were over 100 education sessions to choose from! I set about reading up on what was on offer and bookmarking the sessions I planned to participate in. There were so many to chose from that on some occasions I found myself being torn but I was so excited to see the event really starting to take shape.

For winners of the scholarship the conference started a day earlier. Thursday evening would start with a collaboration session for the 18 winners followed by a dinner where we could all get to know each other. For the following four conference days I put together a programme consisting of a visit to the Duke Ellington School of Arts as well as sessions on sustainability, building a winning team, overcoming adversity, making time for professional development and collaborative leadership. Several times I logged back into app and changed my mind about which sessions I wanted to attend but I was in no doubt that I would be learning a huge amount over the entire five day experience.

Wednesday 23rd October finally arrived and I set off to London Heathrow Airport to catch my flight to Washington Dulles International Airport. The 8-hour flight was a rather bumpy affair but I passed the time by alternating between dozing and watching Keeping Faith (a riveting drama set in Wales).

I arrived at my destination and passed uneventfully through the airport before locating my shuttle bus to take me to my hotel. I finally arrived after a long day of travelling and quickly set about unpacking and making myself at home. It was a lovely room at the Residence Inn, overlooking the conference centre. The staff were so welcoming and gave me recommendations for dinner as well as suggestions on where to buy proper teabags (more on that to follow!)

Thursday arrived and I was bursting with excitement about what the day ahead would bring. I used the day to check in with my family on a video call and then go out and about in the National Harbor area. I was disappointed to only find Earl Grey teabags in the local supermarket and lamented about this on Twitter. Many sympathised with me and I made a mental note never again to leave the U.K. without packing teabags.

The evening arrived and I picked out my outfit, picked up my iPad and headed over to the conference centre. I was nervous about walking in alone, especially knowing that I was the only person in the group from overseas. I’d seen pictures of the other 17 scholarship winners as well as the two mentors assigned to look after us. They all looked like pleasant enough people. I was sure I’d find at least one person to talk to.

The conference centre was absolutely huge and it took me a while to find the room I was meant to be in but then I saw this sign and knew I was in the right place: 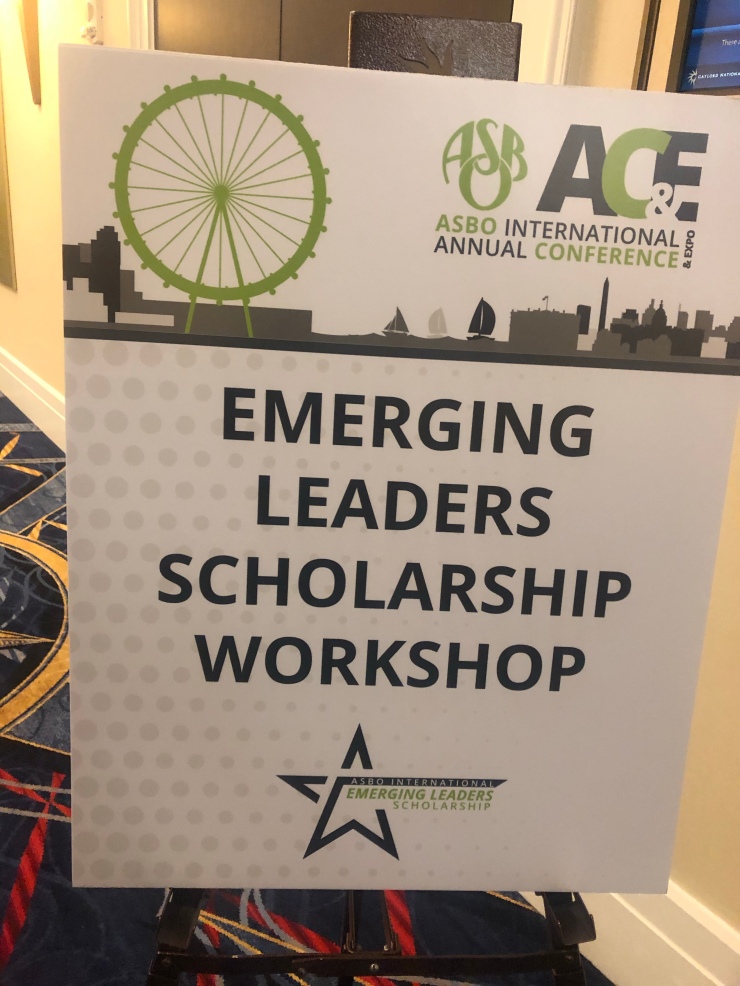 I took a deep breath and walked in. I was greeted by lots of smiling faces of fellow scholarship winners and also staff from ASBO Intl. The wonderful Molly (who had been the person to contact me and give me the news of the scholarship way back in June) welcomed me to the group. We’d had so much interaction over the last few months we felt like old friends. Molly said “I have something for you from Siobhan” and turned to fish for something in her bag (Siobhan is Molly’s colleague who originates from the U.K.). When she turned back to face me she was holding a small bag with a stock of PG Tips teabags. I was touched to realise that my SOS on Twitter had been seen and ASBO Intl staff had made that extra effort to make me feel at ease. At that moment my tensions melted away and I knew that the next few days would be a grand experience. I took a seat and with a smile on my face I prepared for the evening ahead.

Stick with me because Part 3 of my blog talks about my experiences of meeting other delegates and navigating my way through the conference.

One Reply to “My American Experience – part 2: Making preparations”

This site uses Akismet to reduce spam. Learn how your comment data is processed.